Ah Italy! Famous for so many things, it’s a country that combines tradition, art and style into every part of its iconic culture. Indeed, only in Italy could a rather ugly US military motorbike be the inspiration behind one of the country’s most famous modes of transport: the Vespa. Think of this rather cute motorcycle and images of beautiful people scooting through stunning landscapes and living ‘la bella vita’ come to mind. Synonymous with freedom and the ultimate in uber cool, this funky motorbike has become very much a part of Italian life and is the highlight of a Walkabout Florence Tuscany Vintage Vespa Tour.

Florence is the ideal base from which to explore Tuscany and this epic tour offers you the chance to get the motor running and discover the area just like a local would. 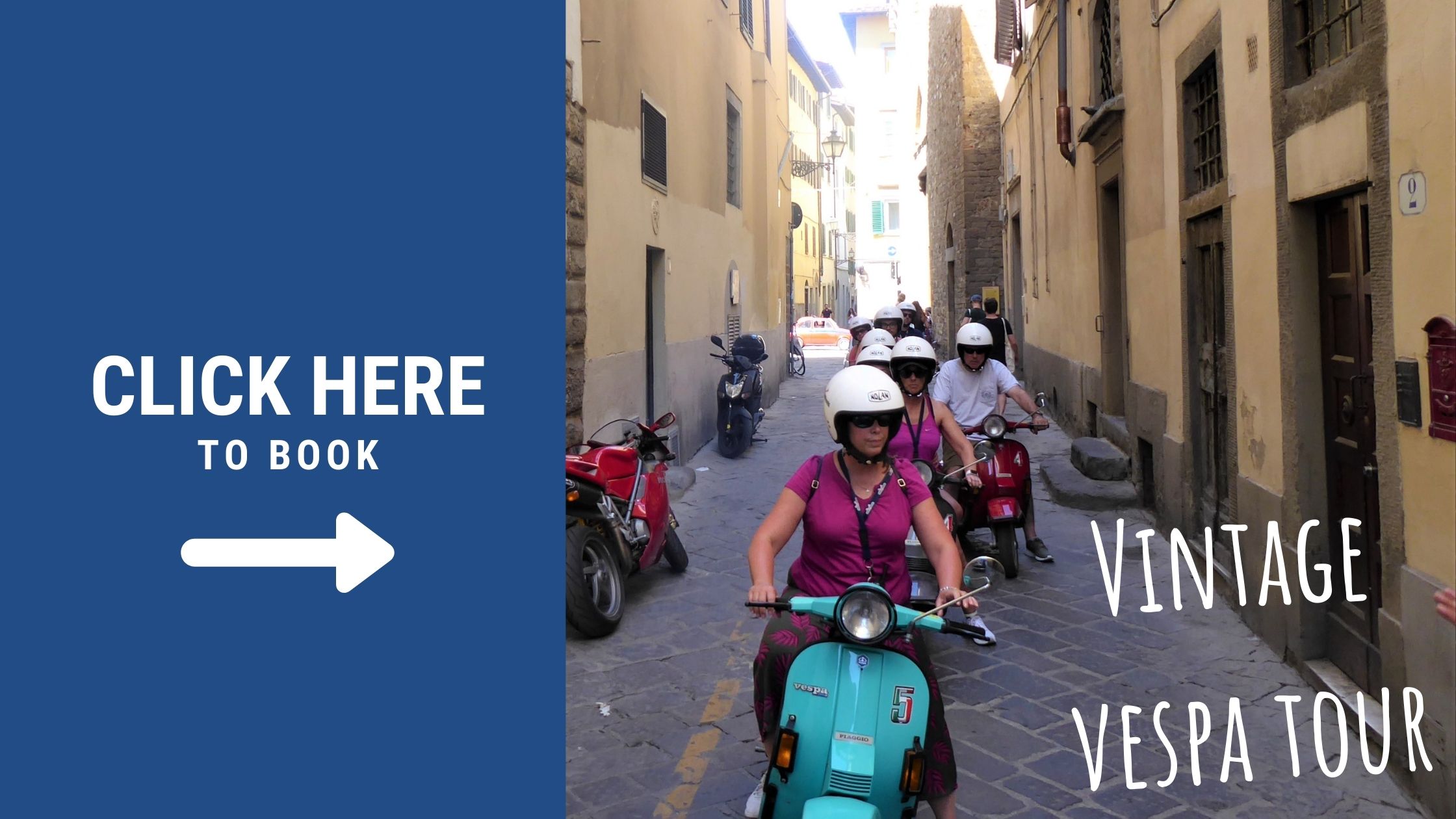 The History of this Incredible Machine

It’s hard to believe that it was the olive-coloured Cushman Airborne motorcycles dropped by parachute during WWII into Milan and Turin to be used in the fight against the Germans that was the design motivation of this two wheeled piece of art. Both wars played a big part in the history of the Vespa; an Italian icon that came to fruition as the brainchild of the young and inventive Enrico Piaggio. The famous manufacturer whose company was originally involved in fitting out luxury ships, and then building rail coaches was later forced into producing aircraft and seaplanes for the war effort. Piaggio’s factories were built in 1917 in Pisa and then four years later in Pontedera. They were both constructed as plants for the building of high-tech P-180 engines for bombers, but were consequently made strategic military targets that, tragically, suffered many attacks. 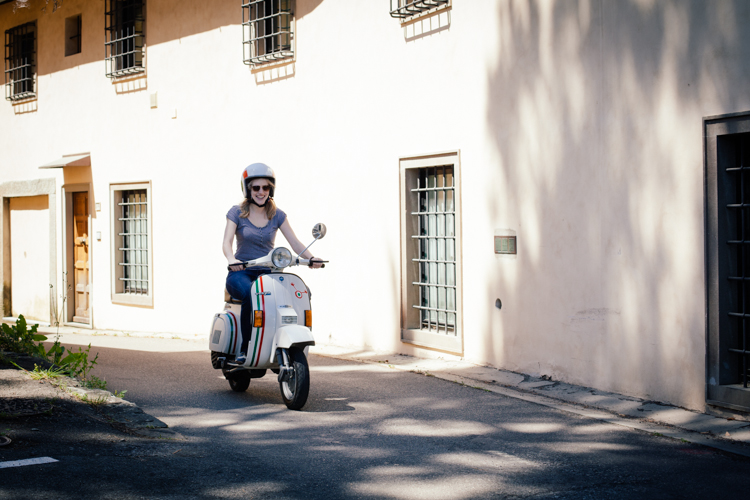 The good news was that with help from the Allies, the factories were rebuilt and Enrico Piaggio decided that now, as the war was over, the time was right to design a suitable scooter for Italians to get around the bomb-damaged cities. He remembered the tiny motorcycle that was made for the parachutists during the war and realised how convenient it was and how accessible it could be to local people. He contracted Carrodaino D’Ascanio, an aeronautical engineer, to come up with a design for something similar, but the prototype that was known as the MP 5 and nicknamed the “Paperino”, which is the Italian name for Donald Duck, had a rather strange shape, and Enrico Piaggio was not happy with it. D’Ascanio set to work rethinking how the scooter could look, but this time he felt he had more free reign to use his aeronautical engineering brain and he steered the design away from the clumsy, chunky original.

D’Ascanio was excited to have the opportunity to look beyond the cumbersome design that the prototype machine was based on. It was a bike that was hard to fix and rather dirty as well as heavy, and he instead came up with an avant garde alternative that was practical, elegant and easy to drive.

So much about this machine made it appealing and equally accessible to the masses. The gear lever was on the handlebar to make for easy shifting and, thanks to the designer’s aeronautical expertise, he made the body able to absorb stress just as a plane would, eliminating the need for a chain that only created dirt anyway. The wheel design was refined to make them easier to change in the case of a puncture, the seat was made comfortable, and all of the workings of the scooter were cleverly placed behind elegant panels so the rider was never at risk of getting their clothes dirty. In short, the designer made good use of his experience working in the aeronautical design industry and answered every problem he encountered. 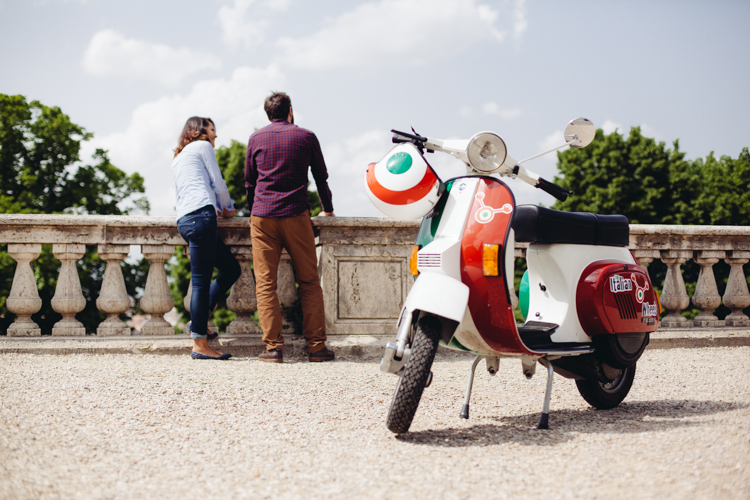 One of the most modern features that made this icon the epitome of fashion was the step-through metal frame, which meant it could be ridden by stylishly-clad women as well as men.

Meaning “wasp” in Italian, the motorcycle was named by Enrico Piaggio, who felt it resembled the insect because of its buzzing sound and narrow waist.

On April 15th, 1946, the innovative two wheeled motorised machine appeared on the cover of La Moto magazine, shortly after which it featured at the Milan Design Fair. It was patented on 23rd April, 1946, a year before Lambretta (who had made a similar motorcycle) was able to make its launch. Despite market experts initially divided over the success of this new innovation, any scepticism was soon extinguished. Many replicas trying to mimic the design came from Japan, Germany and even Great Britain, who all made a bid as competitors. But none were able to produce a machine that was as beautiful and elegant as the real thing; something you will definitely appreciate on your Vespa tour.

Florence was soon to be among the many Italian cities that become host to two wheeled riding locals. Piaggio wasted no time in capitalising on the positive reactions after the launch and went into production with the 98 model. Soon after, the bigger 125cc model was born, and in only its second year of production Piaggio sold more than 10,000 of them. Fourteen years later, in 1960, two million scooters were sold, propelling this charming machine into the motorised travel history books.

The simplicity and retro appeal of the motorcycle’s design gave it endless kudos, and it wasn’t long before it began appearing in stylish magazines and photographed alongside famous models. Long associated with high fashion and beautiful ladies as well as suave gentlemen scooting along narrow coastal roads, the motorbike’s innovative style has been consistently linked with the fashion of the day. 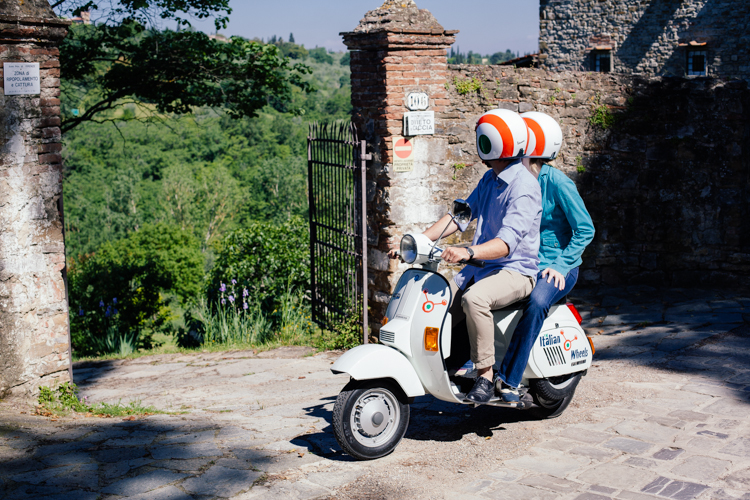 You only have to think of the Hollywood film, Roman Holiday, with the classic scenes of Audrey Hepburn and Gregory Peck riding through Rome on a Vespa, to realise the strong connection the scooter had with the glitz and glamour of the era. Some might say it should have been given star billing alongside the actors, as it was the scooter that played such a role in creating the atmosphere and the scene itself.

More recently, The Talented Mr Ripley and American Graffiti have featured the retro scooter, and household names such as Joan Collins, Raquel Welsh and Jude Law are among the many celebrities who have been captured posing with the Italian motorbike. Gwen Steffani even rides one in her 2007 video Now That You Got It.

Britain was one of the first countries outside of Italy to take on the Vespa and when we think of the fashionable ‘60s in the UK, the funky little scooter was often featured. The Mods, with their chic suits and funky parkas, adopted it and made it part of their style. They pimped the design, adding extra lights and mirrors, too. British seasides on bank holiday weekends were always inundated by the Mods showing off their trendy scooters on a Vespa tour. Florence and other Italian cities might well have been the inspiration behind this zippy little scooter but that didn’t mean it wasn’t suited to other country’s city roads and seaside towns as well!

Foreign markets watched the birth and the growth of the Piaggio innovation with keen interest, and were right to do so. Enrico Piaggio made a point of spreading the word about his beloved enterprise and he developed a huge service network all over Europe, initially, and then the rest of the world.

The rise to fame of this unassuming wasp like machine was unprecedented and its popularity continues to this day, with countries all over the world importing the much loved Italian motorcycle. The image is iconic and the associated merchandise includes everything from clothes to clocks.

In its heyday the Vespa appeared in many official road and off-road races and was at the centre of several successful challenges. Some of the most famous ones are listed below:

In 1952 the much loved scooter was remodelled and reinvented as an amphibious machine by Georges Monneret, who achieved great acclaim when he crossed the channel in it.

In 1951 Piaggio built a 125cc prototype for speed racing and it actually broke the world speed record for a kilometre. Its average speed was 171.102 km/hr.

Again in 1951, the Italian scooter won nine gold medals at the “International 6 Days”, in Varese. It was also involved in an expedition to Congo in the same year, which was to be the first of a number of journeys that raised the profile and helped solve the problem of urban and intercity traffic.

The little motorcycle has been involved in several high profile long distance expeditions. Giancarlo Tironi reached the Arctic Circle on one, while Carlos Velez crossed the Andes from Buenos Aires to Santiago del Chile on his. Pierre Delliere, a Sergeant in the French Air Force, travelled through Afghanistan, reaching Saigon in 51 days from Paris on his machine, while Giuseppe Morandi travelled 6,000 km through endless desert on his scooter in 1948. Two Danish journalists, a brother and sister, reached Bombay on their Italian motorcycle, and Ennio Carrega went from Genoa to Lapland and back in 12 days on his.

Bettinelli, a famous writer and journalist fell in love with the Vespa and rode his from Rome to Saigon in 1993, before heading off on an epic voyage two years later, covering 36,000km from Alaska to Tierra del Fuego. He and his two wheeled travelling companion have literally crossed continents, traversing Australia, crossing Chile, Africa, the Americas, Europe, Asia and Siberia. All together Bettinelli has clocked up 254,000km!

Why not make your own exciting expedition on a Vespa? Tour Florence and its surrounds on one of these scooters and you’ll soon be living la bella vita! 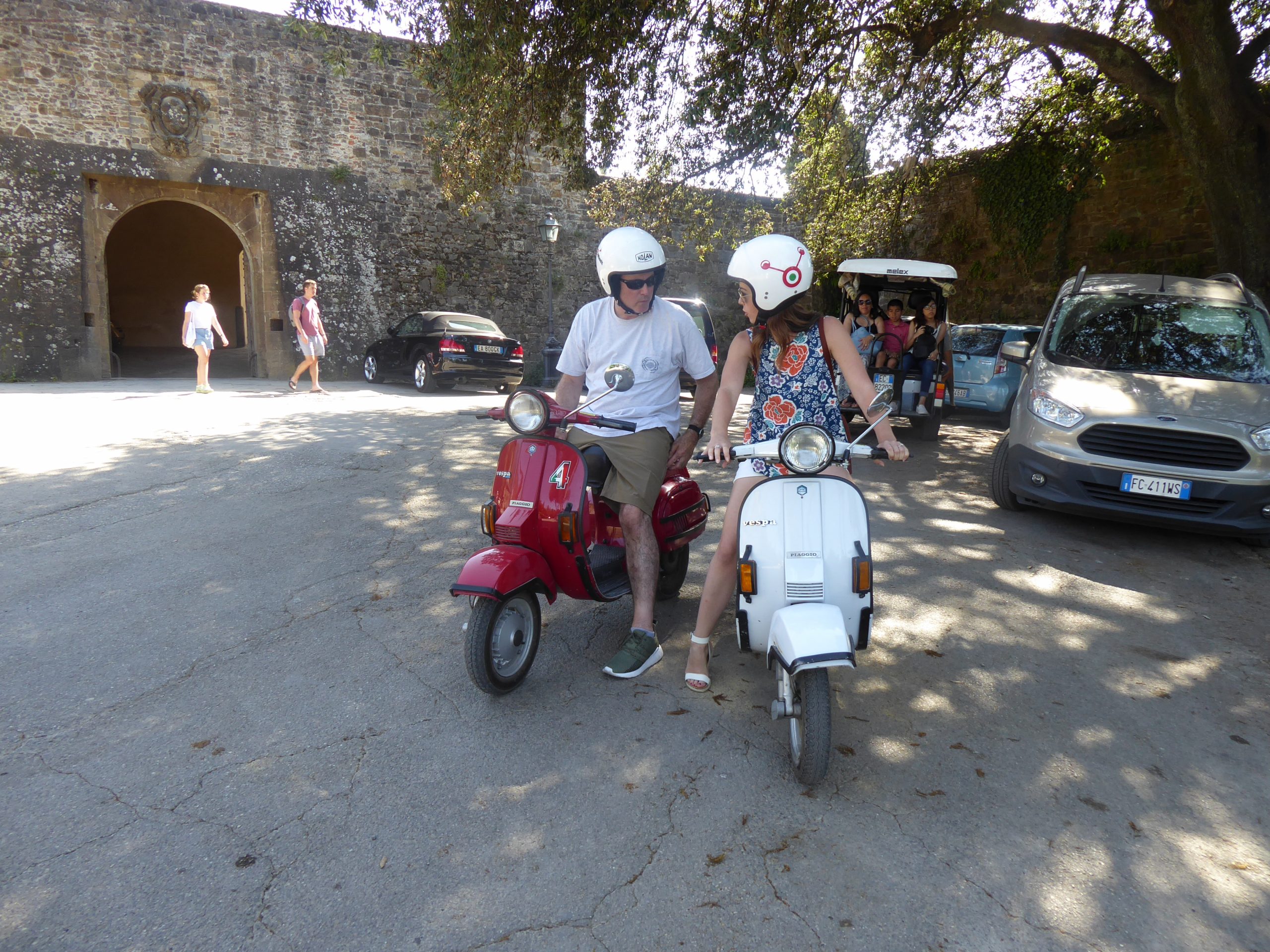 There is no doubt that the Vespa is the creme de la creme when it comes to fashion and its future on the worldwide virtual catwalk is set to shine for many years yet. If you fancy embracing the Italian way of life, letting your hair down and dodging up and down the Florentine streets before heading off into the rolling hills on the most famous of all scooters, why not book a vintage Vespa tour? Florence is such an incredible place to discover on two wheels and there is nothing quite as exhilarating as exploring on one of these iconic beauties. Jump on!

Here at Walkabout Florence, we offer a range of wonderful day trips from Florence. Whether you want to taste the famous wines of Chianti, discover the magic of the Cinque Terre, learn to cook like a local or feel the wind in your hair on a Vespa tour, Florence and its surrounding areas are what we know best. Our expert guides are all local and full of knowledge that will help make your experience even more memorable. Contact us to find out more and let us help you decide on which tour is best for you. 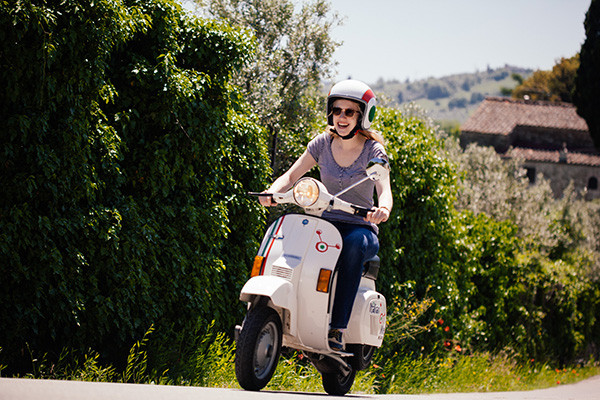