Right in the heart of Tuscany, Florence, a romantic city bursting with Italian charm, is a haven for lovers of Renaissance art and architecture. Playing host to some of the most incredible works of art ever created, the city is like an open air museum; everywhere you turn another stunning architectural feature greets you. One landmark, however, remains the most iconic in the city: the magnificent Duomo.

Well known as the stand out feature of Florence’s skyline, this beautiful cathedral is recognised for its sheer size and unrivalled beauty. For anyone wanting to get up close and personal to this fascinating building, known as Santa Maria del Fiore, we highly recommend booking a Florence Duomo tour with one of Walkabout Florence’s local guides. But before that, read on to learn a little more about what you will have the pleasure of witnessing when you visit. 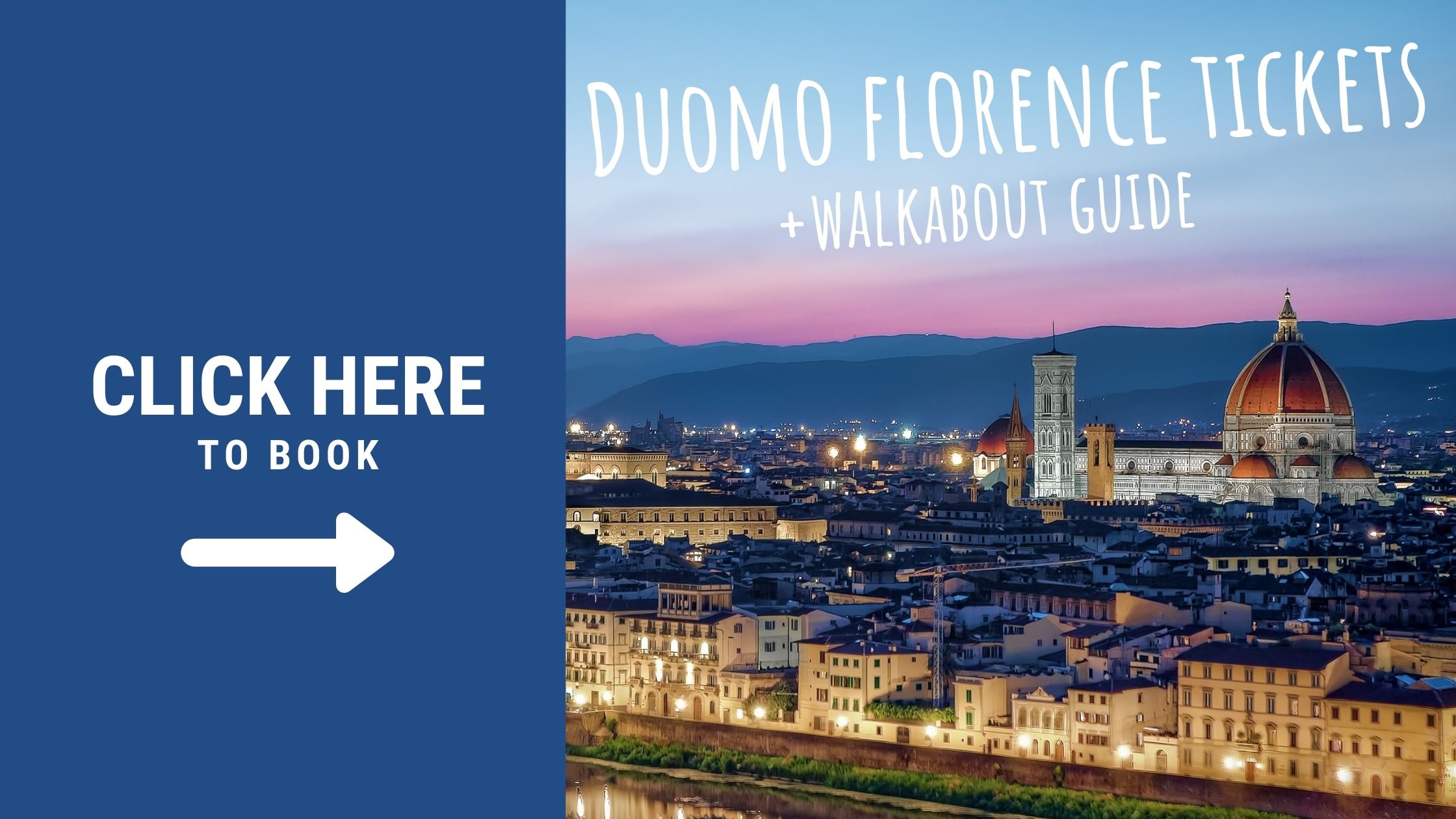 The Third Largest Cathedral in the World

When we said this cathedral is big, we meant it! Only St Peter’s in Rome and St Paul’s in London are bigger. When it was built in the fifteenth century, it was the biggest in Europe, measuring 153 metres long, 90 metres wide and 90 metres high. 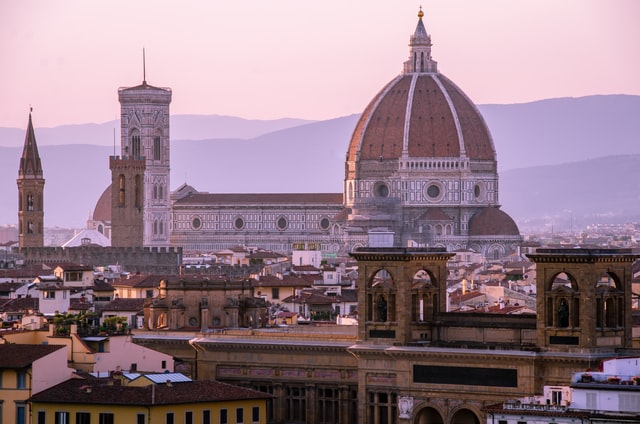 140 years to Complete the Build

The initial plans for the construction were brought together by a committee, in 1293. The idea was ambitious as, at this time, there was no technology to even build the structure. Despite this small but not insignificant fact, construction began, however the dome’s roof remained exposed for many years. In the end, the whole process took 140 years to complete.

This dome feature is a masonry masterpiece, with more than four million bricks weighing over 40,000 tons used in its creation. At its widest it measures the size of half a football field, and from floor to ceiling it stands ten stories high. You’ll get the feel for the huge scale of the building on your Florence Duomo tour, and it must have been even more impressive to locals and visitors when it was first created.

Florence looked to Rome for inspiration for their new cathedral. No plans of the Pantheon were actually discovered, but that didn’t deter the Florentines. There was a distinct move at the time from the traditional Gothic to the more innovative style, and Florence wanted to remain ahead of the game when it came to erecting grand and prestigious monuments in its city. Other Tuscan cities posed tough competition, so the artistic bigwigs of the city looked to the ancient Romans for their creativity.

The Gates of Paradise

The famous bronze doors on the Baptistry in front of the main construction were made by the winner of a competition, held by the city in 1401. Every contestant was given the same materials and the same amount of bronze to use and, after submitting their ideas, two young finalists were chosen: Fillippo Brunelleschi and Lorenzo Ghiberti. The latter eventually won the commission as the judges preferred his classical style. Years later, Michelangelo said that the doors appeared to be like the gates of paradise, hence their name. Looking back at Brunelleschi’s design, some say that his humanistic depiction was ahead of its time and showed early signs of the dawning of the Renaissance. 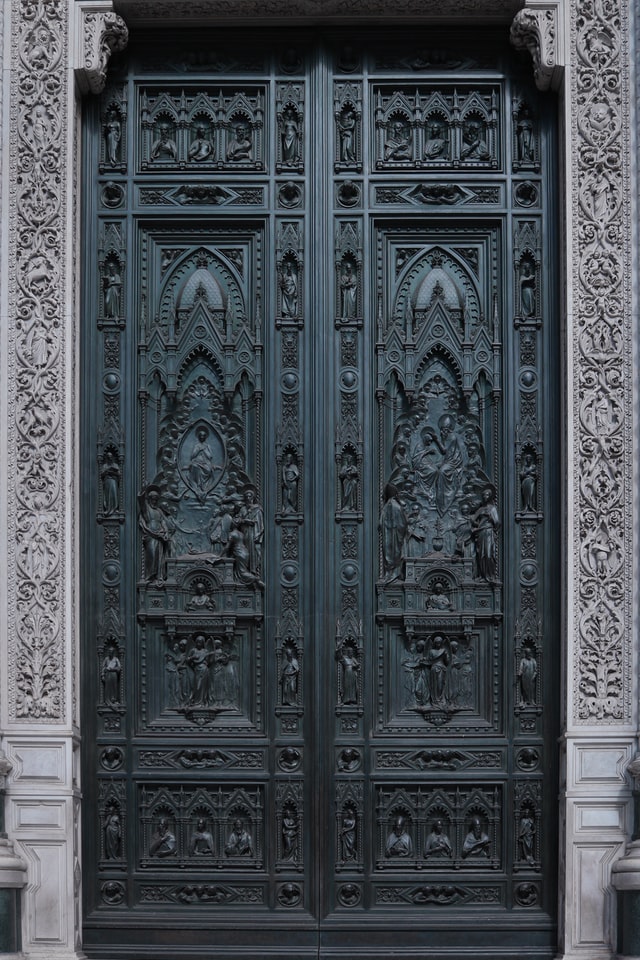 Interestingly, Brunelleschi went to study Roman structures after he lost the baptistry door competition and he didn’t return to Florence until some years later.

When Brunelleschi was Born, the Cathedral was 80 Years Old with an Unfinished Dome

It’s hard to imagine that the man who finally completed the cathedral’s dome wasn’t even born until the construction had been in existence for 80 years! The building had continued with plans always evolving and becoming grander and more extravagant than the original, but the dome had been largely ignored as no-one had the solution of how to create the iconic shape they envisaged. Even the artists who dreamt up the concept of the rounded form were at a loss. The ambition to realise their concept, however, became an obsession with Florentines constantly looking to outdo their rival Tuscan cities, who were also building bigger and more lavish architectural wonders. The influential people of the city would not let their vision fall by the wayside, however.

The Dome Project Competition Offered to the Public

With no solution for the dome construction materialising, the city was at risk of appearing to fail. They had set themselves up as being the creators of the biggest dome structure in Europe, yet for more than a hundred years the creation had not come to fruition. They offered the project to the public hoping that someone would have the know-how to finally make things possible. Most of the competitors came up with designs that involved using wood, but this was considered too expensive both in terms of manpower and time. Fillippo Brunelleschi, however, had a different vision. 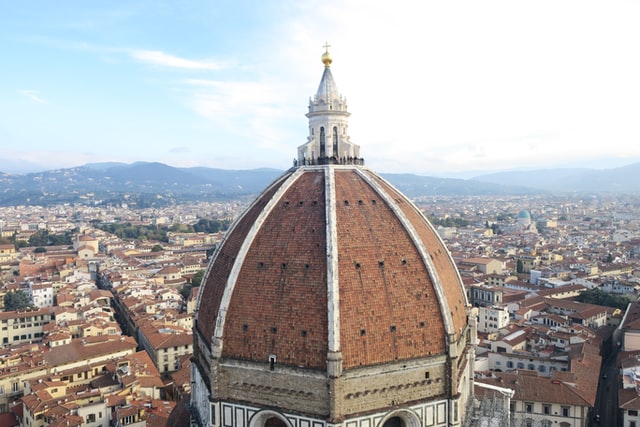 The Florentines were desperate for their problem to be solved and in the end, Brunelleschi’s idea, which was never actually seen by the judges, was chosen. It was his progressive thinking and persuasive presentation to the judges that won him the contract, despite keeping his plans under wraps. In the end he said to the judges that if any one of them could make an egg stand upright on the table, he would reveal his ideas. Of course, none of the judges could, so Brunelleschi took the egg, smashed the bottom of it and made the egg stand up. The panel were confused and remained unconvinced as, after all, any of them could have done the same. Brunelleschi’s argument was that if they knew what he knew then they could build the dome. He was hired.

It was a big risk as he had no experience and his plans remained a secret, but he was duly appointed and allowed to begin building in April 1420. What other choice did the Flroentine’s have? They didn’t want to fail in their much talked about quest.

The Designer and Builder Had no Architectural Training

The man commissioned to design and build the dome was actually a trained goldsmith and he had apparently never built anything in his life before. That said, gold smithery does require skill, practical thinking and an aptitude for aesthetics, and the man in question came up with a solution to every problem he encountered during the build.

Arguably, he was a genius, not only designing the plans to build a freestanding curved wall structure made from brick, but also inventing the tools he would need to create it. He used oxen walking in a circle for the first time and then went on to design a three-cogged wheel system, which was put in place to lift and lower heavy materials without the oxen having to change direction. We now refer to this as the Reverse Gear.

While it might seem a long time in modern construction terms, it was unprecedented that the structure was created in just 16 years. This was the time when designers rarely lived to see their finished work, but this project was an incredible feat that they were able to appreciate and enjoy long after its completion. 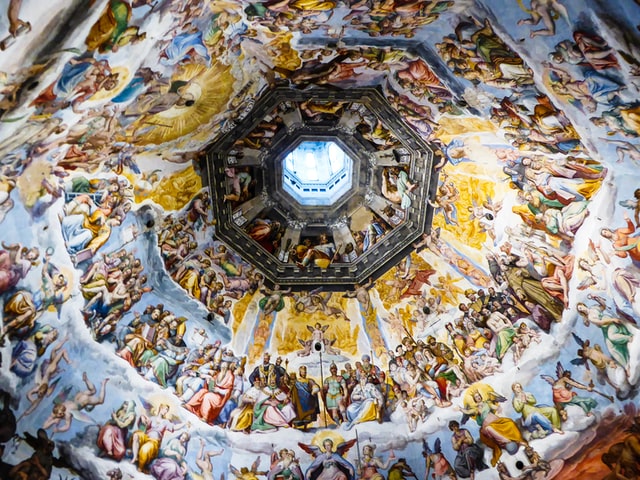 The Secret to Success: a Herringbone Brick Pattern

Brunelleschi worked tirelessly and against all the odds to realise his concept. Critics were rife and he spent a lot of time convincing his builders to trust him, despite asking them to work 170 feet in the air under a structure that had never been tested.

People studied his plans and ideas to try to unearth his secret, but it wasn’t until (ironically) one of his critics found the key to the success of the structure, in a drawing he had done that was intended to dispute Brunelleschi’s methods, that it became known. The ingenious idea of using rope patterns to guide the brick laying seems archaic now, but at the time it was innovative and also necessary, given that there were no levels or lasers in existence.
At the base of the dome structure was a symmetrical flower shape that was the guide for the ropes. This forced the bricks to be built in a series of inverted arches that gradually became smaller as they got higher.

Here within lay the key to the strength of the design and, instead of working against gravity, the herringbone layout and inverted arches used gravity to support the brickwork. Wow! So simple but it took more than a century for this idea to be born.

Interesting Fact: The Name Santa Maria del Fiore means Saint Maria of the Flower, but this name didn’t come about because of the flower at the bottom of the dome. Instead the cathedral was named after the lily flower, which is the symbol of the city.

This incredible man from whom the architects and designers of the time could have learned so much didn’t leave any of his plans behind. Not one drawing, letter or design was ever found.

The Outside of the Cathedral

When you’re on your Florence Duomo tour, the first thing you must do is take a moment outside to absorb the ‘al fresco’ aesthetic of the building. The facade was originally designed by Arnolfo di Cambio, in 1294, along with the rest of the cathedral, but it saw many changes over the years. The drawings of these evolving plans can be seen in the Grande Museo del Duomo, which is well worth a visit. Many people believe that the dome was the last part of the incredible work of art to be completed, but actually the facade was not finished until 1887. Today it is considered a collective design by many contributing artists. 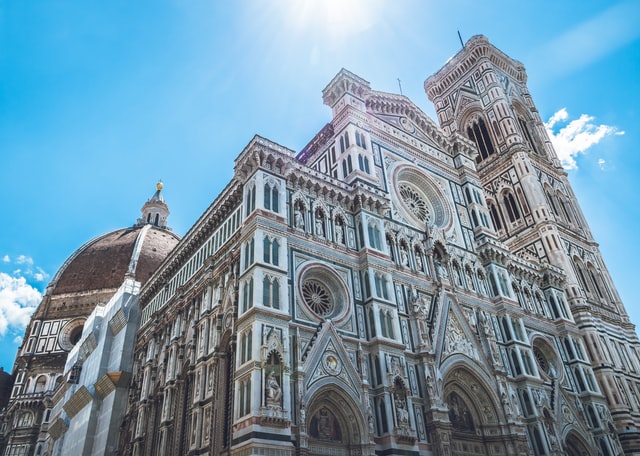 Over time the front of the cathedral underwent much change and reconstruction and indeed was left bare until the nineteenth century. Emilio de Fabris was the ultimate contributor, designing the neo-gothic facade we bear witness to now. The coloured marble you see was sourced from all over Italy.

You Can Climb the Dome

On a Florence Duomo tour you’ll get the chance to climb the internal structure. Between the shell and the brickwork is a staircase that takes you to the top.

Top Tip: Take it slowly as you ascend the 436 steps and take in the original brickwork and the breathtaking frescos that surround you.

There’s no doubt that this magnificent dome, which still remains the largest of its kind ever to be built, is an incredible architectural feat. The number of people who embark on a Florence Duomo tour and are left mesmerised by the scale, beauty and awesome atmosphere never fails to impress me.

To get the most from your much-awaited Florence Duomo tour, contact us at Walkabout Florence and let us take you on a visit to this truly mind blowing icon. The memories will stay with you forever.

Here at Walkabout Florence, we offer a range of wonderful day trips in and around this beautiful city. Whether you want to discover the majesty of the Duomo, bury yourself in the artistic treasures of the Uffizi Gallery, taste the famous wines of Chianti, or discover the magic of the Cinque Terre, we want to help you get the most from your visit. Our expert guides are all local and full of knowledge that will help make your experience even more memorable. Contact us to find out more and let us help you decide which tour is best for you, whether it be in the city itself or in the stunning area that surrounds it. 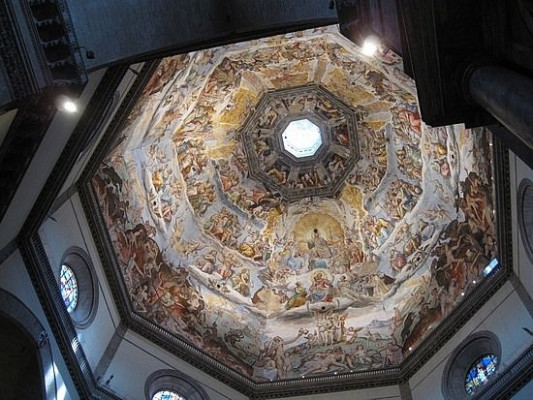