Dante Alighieri, the hopeless romantic
Dante Alighieri is Italy’s most beloved and most famous poet, thought of as the founder of modern Italian language and literature. Born around 1265 in Florence, Dante often used autobiographical references in his works and so actual streets and citizens of medieval Florence often feature in his greatest works, such as The Divine Comedy and La Vita Nuova.

Dantes stories of unrequited love are famous, as is the young Beatrice, the girl he falls in love with at the age of nine. She died at the age of 24, when Dante, in a state of depression, then threw himself into studying Italian philosophy and eventually became heavily involved in his city’s politics, though unfavourably.

There was a great division in Florence between the opposing political parties of the Guelphs and Ghibellines, supporting respectively the Pope and the Holy Roman Emperor, which often erupted into violent outbreaks. The division eventually even spread to the Guelph party itself, which split in to White Guelphs and Black Guelphs. Dante was a White Guelph supporter, opposed to the Papal influence, and he paid for it with exile, never returning to his homeland again. Exiled from Florence in 1301, he was threatened with death by burning at the stake if he returned (a sentence only voided by Florence’s council in 2008). He died in Ravenna in 1320 and is still buried there. Regretful, the Florentines made an unsuccessful attempt in 1829 to return him to Florence by building a tomb for him in the church Santa Croce, which remains empty.

Sasso di Dante, Piazza Duomo
The Sasso di Dante, or Dante’s stone was a favourite spot of Dante’s. Although the stone is no longer there, there is a plaque on the wall of the sourthern side of Piazza Duomo that claims to be the spot where Dante apparently sat and wrote poems, while watching the walls of the Duomo rise up in front of him.

The church of Santa Margherita de’ Cerchi
From the Piazza Duomo, Via dello Studio will take you to Via del Corso where you can pass underneath the archway of Via Margherita to the Church of Santa Margherita de’ Cerchi. This is the very church where the nine-year-old Dante first saw and fell in love with Beatrice. He was so taken by her from this one meeting that she became his life long muse and true love. He would follow her around the city just to get glimpses of her, even though he barely ever spoke to her.

Amor, ch’a nullo amato amar perdona, “Love, that releases no beloved from loving,” one of the best-known lines from the canto of Paolo and Francesca in Dante’s Divine Comedy, poetry that was above all about love and the adoration of female beauty. The importance of this writing style was that for the first time it ennobled the Tuscan dialect, which, thanks to this incredible legacy of literature, eventually became the Italian national language.

Dante’s house and neighbourhood
The Alighieri family owned several houses around the corner from the church on Via Dante Aligheri, where you can now find the so-called “Casa di Dante” or Dante’s house. More than being Dante’s acutal residence, it is a small museum, the interior filled with copies of the Divine Comedy, portraits and reproductions that celebrate the life of Dante. But this little corner of Florence’s ancient centre has some great examples of typical medieval buildings, such as the Torre della Castagna (the Chestnut Tower), the tiny church of San Martino and the Badia Fiorentina, which were around during Dante’s day.

In front of the Chestnut Tower and on the corner of Via Dante Alighieri is the tiny parish church of San Martino which dates back to the 10th century. Decorated with beautiful lunettes by a painter of the school of Domenico Ghirlandaio (possibly his brother Davide or a student), it is a wonderful account of Renaissance life.

Florence was one of the most important banking centres in Europe in the 13th and 14th centuries,. The Florentines invented the letter of credit and the gold florin, the first international currency, but it also experienced an unfortunate chain of bankruptcies in the mid-1300’s, which led many to turn to what the church considered the very sinful practice of usury (loaning money at a high interest rate). The church dedicated itself to helping the poor or the recently bankrupt who were too ashamed to beg (known in Italian as the poveri vergognosi). You can still see the niche outside the door of this little church where candles were lit to encourage the wealthy citizens to leave donations to the church to help the poor. There is still an expression used in Italian, essere ridotti al lumicino, literally “to be reduced to the little candle,” which means to be broke.

The Bargello
Just a block away is the Bargello museum, which during Dante’s time was the headquarters of the City Council of Florence. It was here that Dante’s exile from the city was proclaimed. Inside the chapel of the Bargello is a fresco attributed to none other than Giotto, who was a contemporary of Dante. One of the most well known and quite possibly the oldest portrait of Dante depicts him in Paradise, one of the earliest known images of the poet. 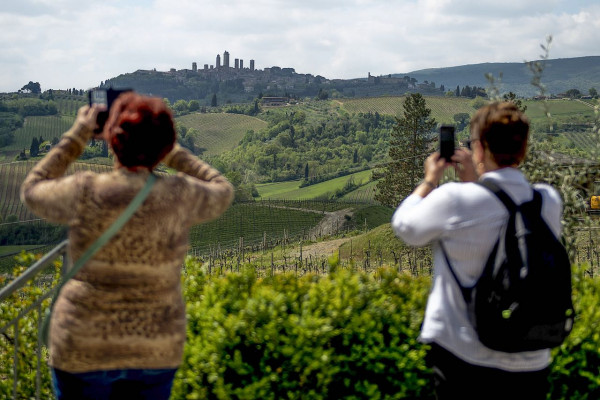