For art and culture lovers, Florence is a city that holds almost unlimited appeal. It seems that everywhere you turn you can, and will, discover a new and exciting Renaissance treasure just waiting to charm you – just as they have done for countless others over hundreds of years. In fact, the UNESCO listed city centre serves as its own open-air art gallery, with magnificently preserved architecture, iconic monuments and a cache of priceless artworks hidden behind every door, down every back alley and, most famously, within the walls of its world renowned galleries and museums.

The best Florence tours will encompass some of the most high profile of these galleries and museums, including:

There are also countless smaller galleries and lesser-known museums that you might be recommended, or perhaps even happen upon by accident – the city is, after all, the so-called ‘Cradle of the Renaissance’.

There’s one notable absence from the list above and it’s actually one of the most visited places in the entire city – but we haven’t forgotten it, it’s because we think that when it comes to the best Florence tours it deserves a post all of its own!

The world-renowned Accademia Gallery is filled with all kinds of historic, cultural and artistic treasures, but most people are really here to see one thing above all others: a certain young man’s likeness carved from a single block of marble, who goes by the name of David. 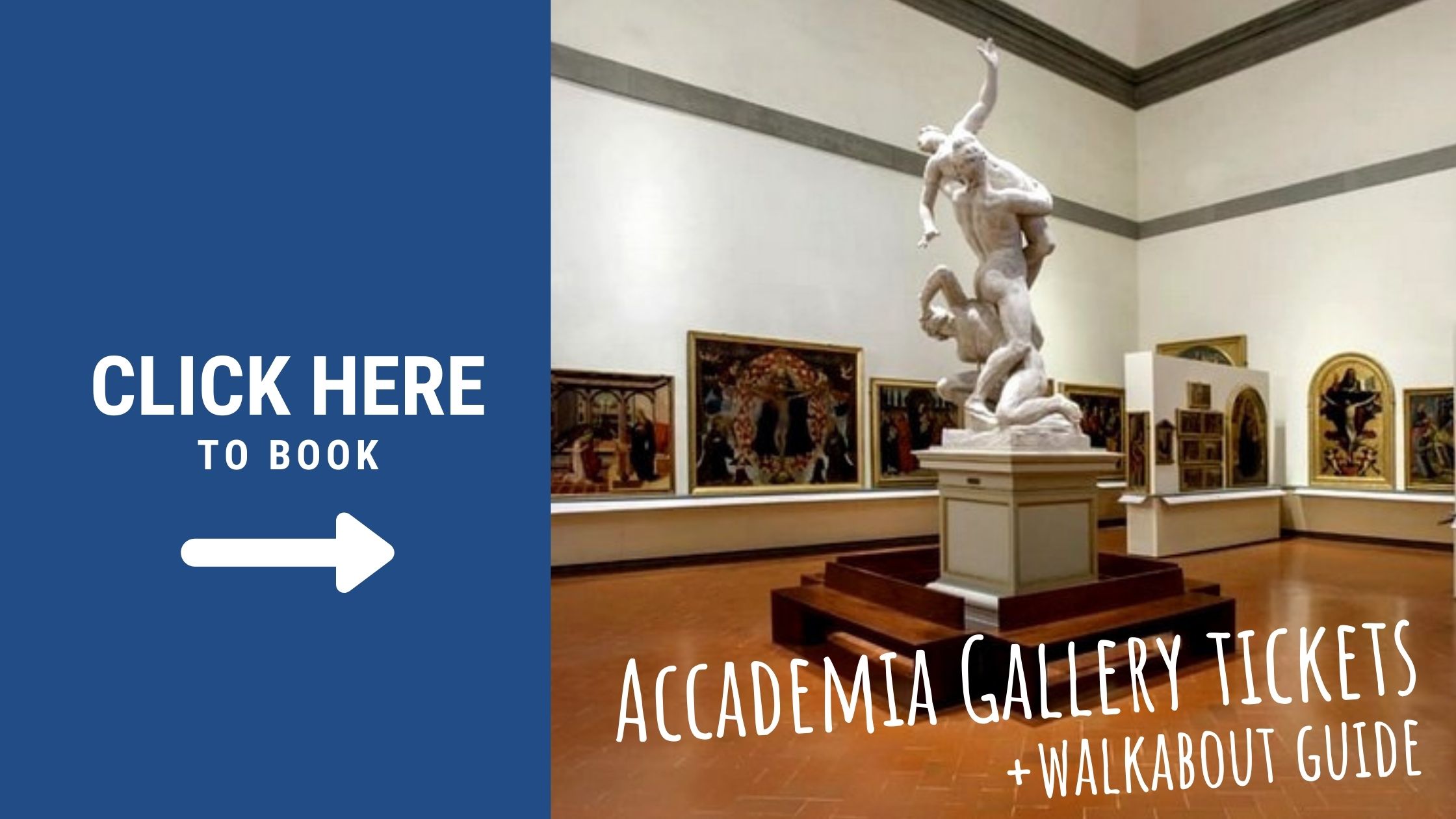 A visit to come and marvel at this spectacular masterpiece of Renaissance sculpture is high on the list of all the best Florence tours, but even though David is the undoubted hero of the gallery, there is also a lot more to discover within its hallowed walls if you have the time and inclination to spend a few hours exploring.

Top Tip: At Walkabout Florence, we’ve put together the perfect package that takes all the stress out of organising a visit to the gallery. Our Accademia Gallery Tickets and Walkabout Guide allows you to skip the queues (which can be incredibly long) and also includes rental of our unique digital guide. Downloaded on a customised smartphone, the guide delivers a fabulous insight into the cultural and historical significance of the gallery, and provides a wealth of information and expert commentary – it’s right up there with the best Florence tours and it’s just as if you had your own private local guide with you as you walk around.

To give you a head start and perhaps whet your appetite for a visit to the gallery, we’ve gathered some of the history and highlights to give you an idea of what to expect on your tour. 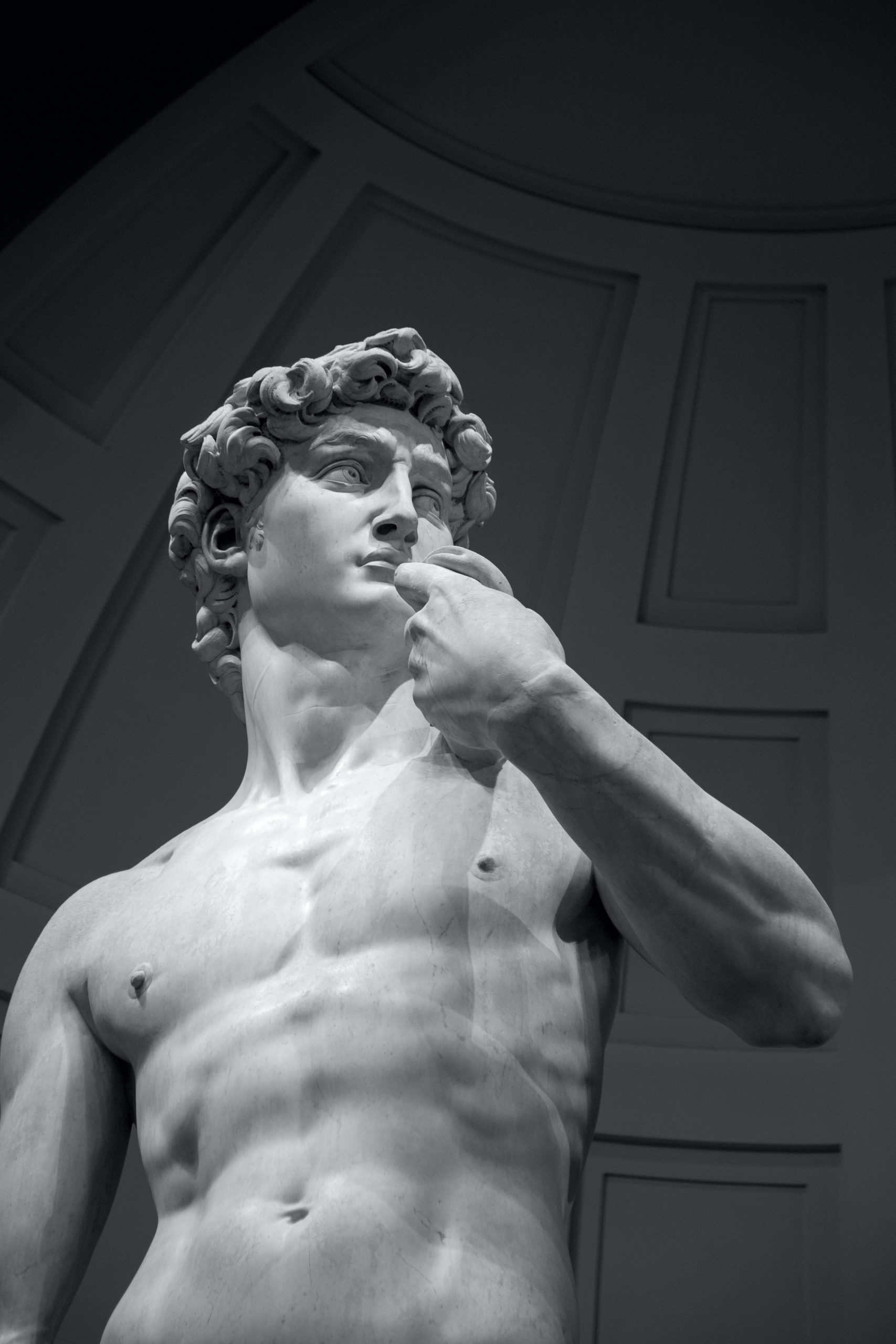 History of the Accademia

Somewhat surprisingly for somewhere that’s so revered, the building doesn’t look like much from the outside. This is perhaps explained in its humble origins as convent and hospital, before being converted into an academy of fine arts, in 1784.

Over the ensuing decades into the nineteenth century, Grand Duke Peter Leopold of Lorraine gathered a collection of paintings and sculptures (from various museums and convents), which came to be housed in the building. But it was in 1873, that a decision by the city became one of the most fortuitous moments in the gallery’s history.

In order to ensure the preservation of Michelangelo’s magnificent Statue of David, which previously resided in the Piazza della Signoria, it was moved to a new home at the Accademia. But in order to honour it in the manner it deserved, it was decided that an extension would be built inside the gallery, topped off by a vaulted apse, to display the sculpture. The task fell to the architect Emilio de Fabris, who had worked on parts of the famous Cathedral of Santa Maria del Fiore. His design featured a skylight overhead the exact spot where David was to be placed, and the drama was complete.

Since then, there have been many changes to the collection, including the acquisition of several more pieces from Michelangelo, Lorenzo Bartolini’s nineteenth century models, and a host of other paintings, which now reside in the Byzantine Rooms and the Hall of Colossus. The gallery was opened to the public in 1892 and today it is so popular there are constant lines to enter at almost any time of the day. It’s second only to the Uffizi in terms of visitor numbers and is considered of huge cultural value to Italy. 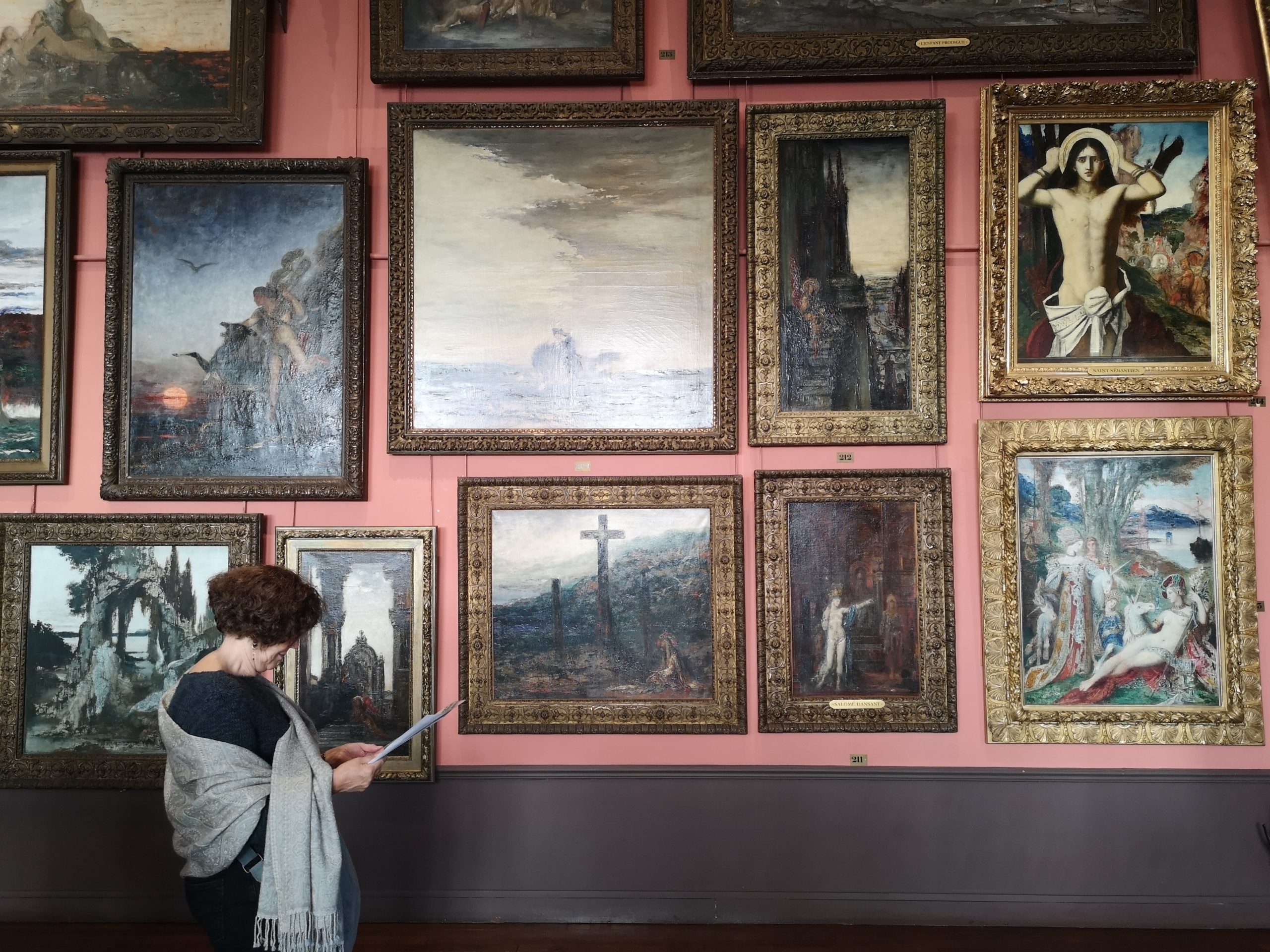 While it isn’t overwhelming like the Uffizi, understanding the basic layout will help you plan your visit and let you decide approximately how much time you want to spend in each section.
Everyone will be different depending on what’s important to them, but it’s generally accepted that two hours is the approximate amount of time you should spend here. Let’s face it, you could well spend the first hour simply staring up entranced at David. In the areas away from David, however, you’ll find fewer crowds and a more relaxed atmosphere.

Hall of the Colossus

This is the first hall as you walk into the gallery. It was refurbished in 2013 and is home to the plaster cast of Giambologna’s famous Rape of the Sabines, many fifteenth and sixteenth small religious panel paintings, as well as one by Botticelli called the Madonna of the Sea, and many other important paintings, frescos and altarpieces.

Hall of the Prisoners

The hall is named for the four large nude male sculptures by Michelangelo that hold pride of place, known as the Prisoners or Captives. There are also many paintings, frescos, busts and panels by, or related to, Michelangelo in the hall.

Home to David, naturally this is the busiest of all the halls. Sitting directly under the skylight, the sculpture has undeniable pride of place, but there are also plenty of other things to look at too.

This room offers a really great insight into how the master sculptors cast in plaster first in order to create their works. The room features a collection of nineteenth century plaster casts by Lorenzo Bartolini, one of the original professors of the fine arts academy and a renowned sculptor in his own right.

Set over three rather austere rooms is the extensive collection of Florentine Gothic painting from the thirteenth and fourteenth centuries. It includes numerous works by Giotto, in the Giottesque Room. 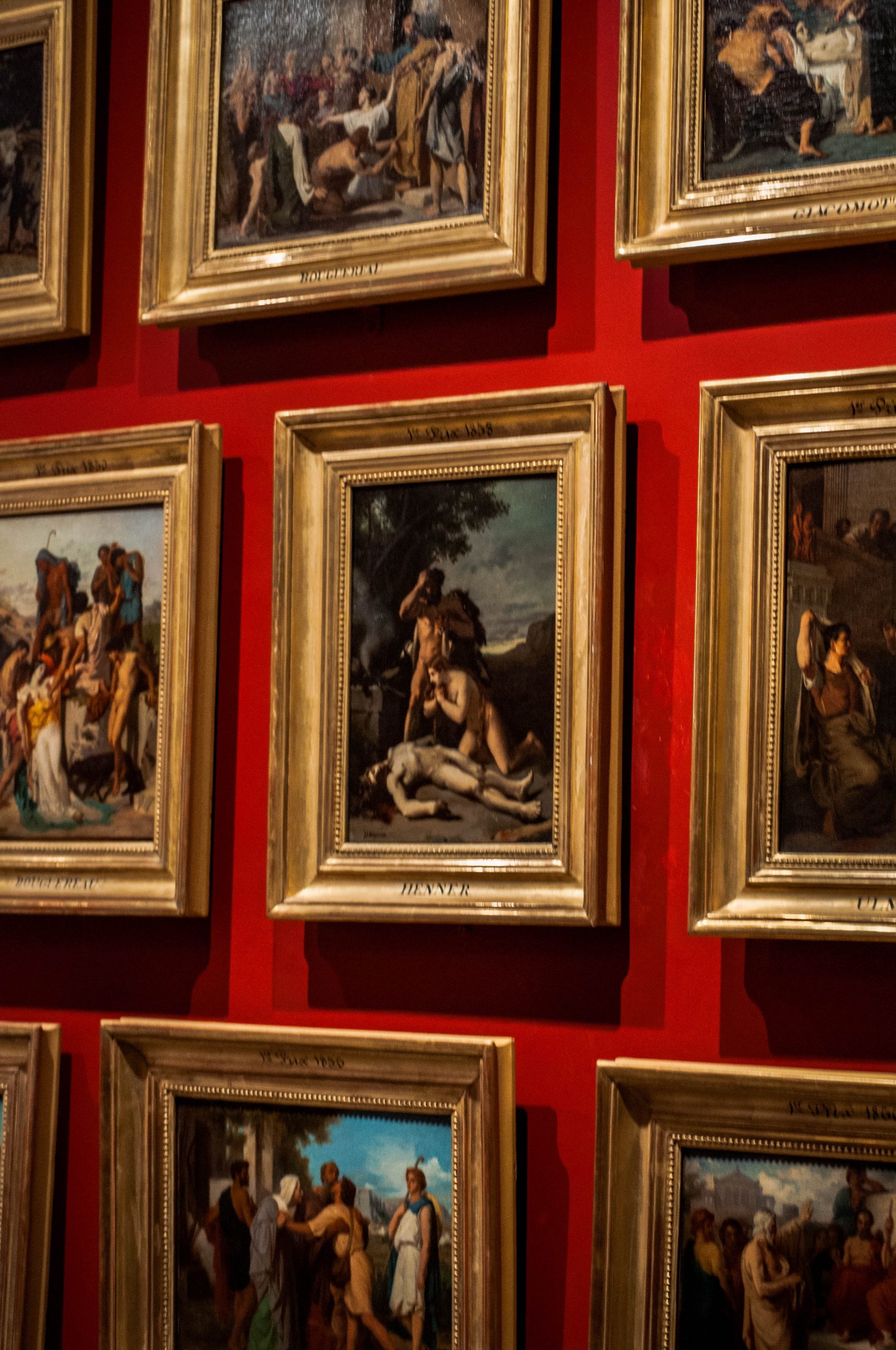 The Museum of Musical Instruments is a self-contained gallery housing more than 50 musical instruments, including harpsichords, wind and string instruments and one of the first pianos. One of the highlights is the impeccably preserved 1690 Stradivari tenor viola – now the only one of its kind.

This last room, set on the second level, is home to Florentine paintings dating from 1370-1420. It has a lovely peaceful atmosphere and remains much less crowded than other parts of the museum. It also includes some examples of fourteenth century fashion and some wonderful altarpieces from the Florentine Guilds.

With such a vast range of art on display it’s very hard, and hardly appropriate, to try to choose the best. Florence tours that include a visit to this marvellous gallery can be constrained by the time factor – which is why we suggest our package that includes entry tickets and our unique Walkabout Guide, enabling you to go at your own pace.

You will, of course, discover your own favourites, but having been there quite a few times ourselves, we’ve got a few of our own to share.

Well it wasn’t likely we’d leave this one off the list, and to be honest, bearing in mind its size (more than five metres high) it’s more a matter of ‘can’t miss’ than ‘don’t miss’. David is everything you’ve heard about and so much more – and this is one attraction that definitely lives up to the hype. When you consider this masterpiece was created from one solid piece of marble, when the artist was just 26 years old, the scale and detail seem even more incredible. The most important thing to bear in mind is not to just take a photo and tick it off your list – take the time to really study the sculpture and consider what an incredible feat it represents, because you really are looking at a one-of-a-kind piece. 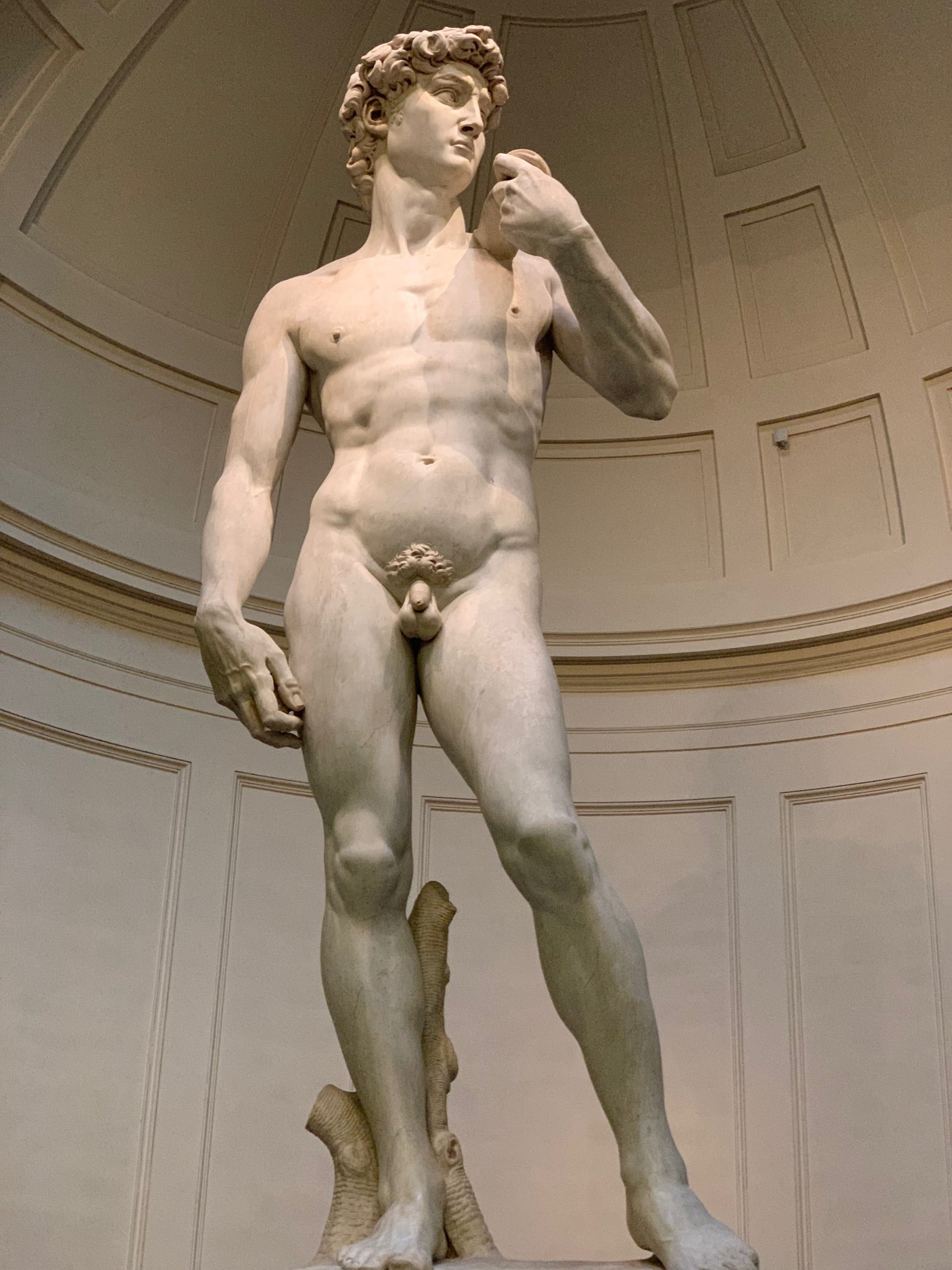 Known as the Prisoners, or the Slaves, these four statues are unfinished – but that adds to their intrigue, as we’re able to get an insight into the way the artist worked. It’s as if the figures are trying to escape from the giant blocks of marble from which they are emerging and it’s actually said that Michelangelo left them incomplete on purpose, in order to represent the struggle of mankind to throw off the shackles of material goods. Something to ponder…

Giambologna’s Rape of the Sabines

This piece, which you’ll find in the Hall of the Colossus, is the plaster cast model of the artist’s famous sculpture that sits in the Piazza della Signoria. Comprising three figures, a woman and two men, it is important to artistic appreciation to know that, again, the final piece was carved from a single piece of marble.

This intricately painted panel, dating back to around 1455, depicts a wedding parade taking place in the centre of Florence, with the Baptistery in the background. While its exact purpose is not definitively known, it was probably used as the front panel of a wedding chest to transport a bride’s dowry of household goods to her marital home. Whatever its original purpose, though, it certainly deserves more than a cursory glance as the detail and mastery of the artist known as Lo Scheggia (younger brother of the great Masaccio) is astounding. 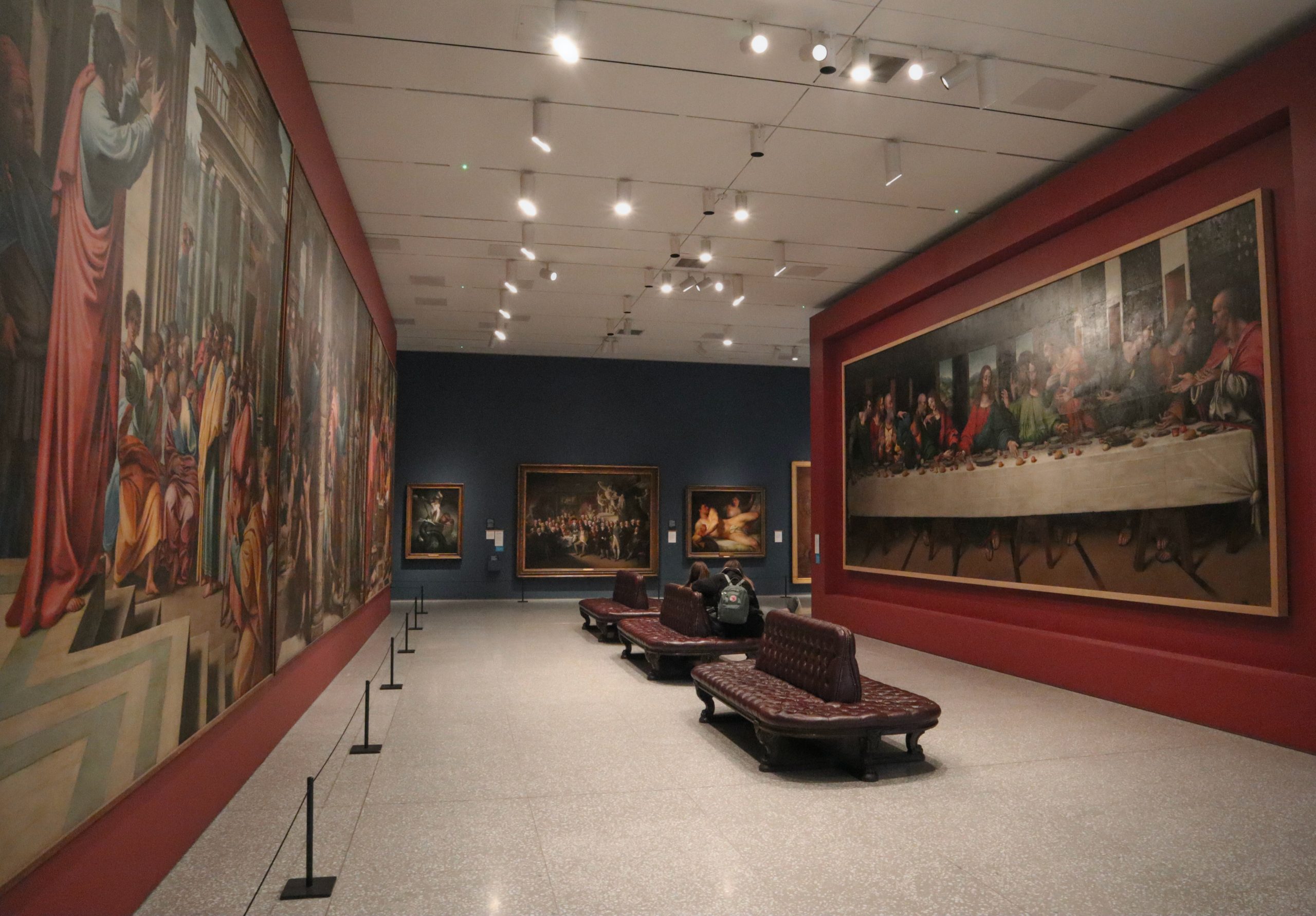 Only recently restored in 2011, this magnificent panel is the artist’s most famous piece. It is truly dazzling in its use of gold paint, the intricate depiction of the drapery of the robes and the detailed features of the subjects. It is an incredibly moving piece to view and seems to have an inner light of its own. There is so much to see within it, and this is another artwork that you really should spend some time to admire in order to appreciate its brilliance. As well as the painting itself, even the frame is remarkable – carved by Giovanni di Ambrogio and adorned with the coats of arms of the Florentine Guilds.

Although not everyone who visits the gallery has the luxury of time on their side, for art, history and culture aficionados it really is a wonderful opportunity to gain a broader insight into the heritage of the Florentine artists. Even the best Florence tours can only show you so much, and for those who truly want to delve deeper it may take several visits to make the most of this outstanding place.
If you want to ensure you don’t miss a thing, it’s a good idea to do some research beforehand to work out just what it is you’re most interested in. The way the gallery is set out, it’s not hard to find your way around once you’re there.

Top Tip: If you want the best chance of avoiding the inevitable crowds, come early in the morning or after 5pm.

Walkabout Florence is one of the most trusted and respected operators in the business, with a well-deserved reputation for excellence. We offer the very best Florence tours in and around the city to introduce you to the region’s history, art, culture and food in the most authentic way. Choose from food and wine safaris, Fiat 500 and Vespa tours and cultural day tours accompanied by our friendly and passionate local guides, who’ll help you make the most of your experience. Our highly recommended tours allow you to discover the very best of Italy in the most memorable and enjoyable way. 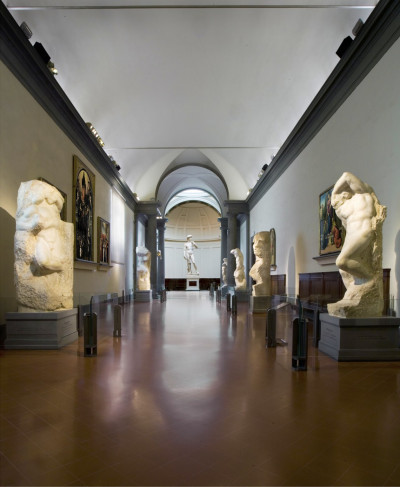